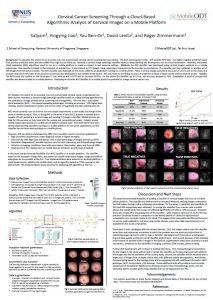 Background: For decades, the search for an accurate, low cost, and portable cervical cancer screening test was elusive. The best screening test today – self-sampled HPV tests – has higher negative predictive value than positive predictive value, and also suffers from high loss to follow up. Recently, a cervical image pathology classifier based on deep learning was developed to run on a local workstation. However, automated visual evaluation (AVE) algorithms need to run on a mobile platform to make an impact in low resource settings.

Methods: An AVE classifier was developed using cervical images captured on a mobile colposcope. This classifier is based on the Inception-v3 architecture. It was trained on 577 images, using colposcopic impression by the provider as annotations. The classifier was then validated on another set of 100 images from the same provider. The AVE classifier was deployed on the cloud, called by an application running on a mobile phone. Here, a cervical image captured at the point of care is sent to the cloud, and a binary response is returned. A low precision model was also developed to run natively in the device – this was done by sacrificing accuracy of prediction in favor of faster results without internet access.