As a part of Domestic Violence Awareness Month, we explain the common signs and symptoms of strangulation in the hopes of helping clinicians recognize, treat, and safety plan with victims to prevent future violence. 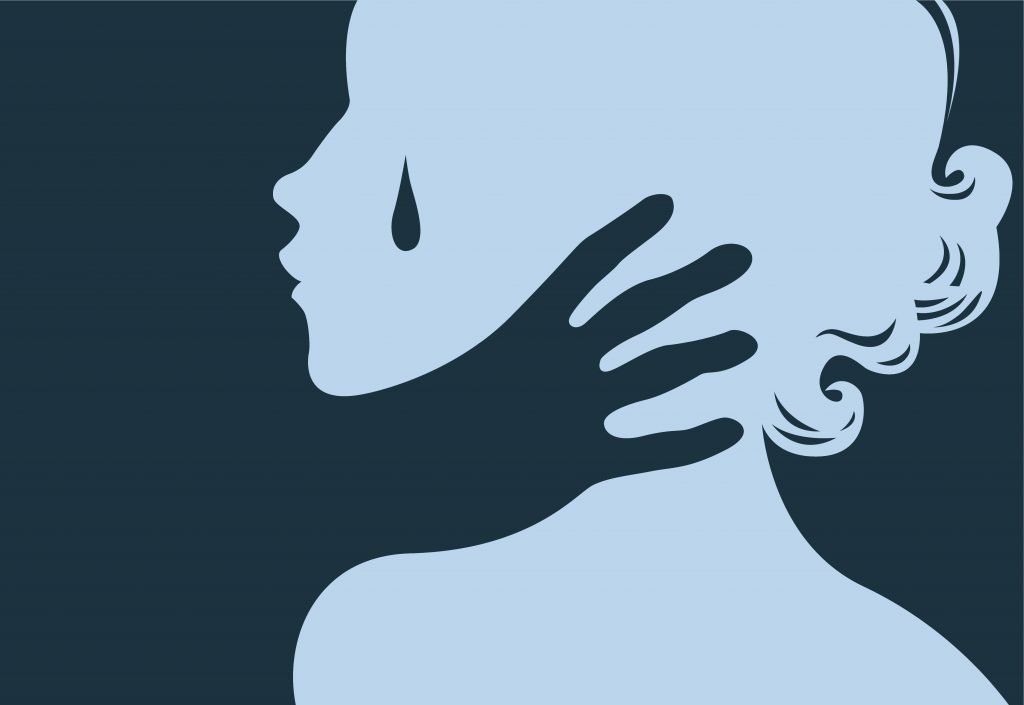 When conducting assessments or forensic exams with a victim of domestic violence (DV), any reported history of strangulation places the person at a higher risk for more serious violence or homicide by the hands of their intimate partner. By recognizing signs of strangulation, healthcare providers can help to mitigate long-term damage, properly document any evidence of abuse, and provide referrals for seeking safety assistance.

The Training Institute on Strangulation Prevention defines strangulation as “the obstruction of blood vessels and/or airflow in the neck resulting in asphyxia.” This type of assault can have serious, permanent, or even fatal damage to the victim’s throat or brain.

Data on strangulation reveals a glaring picture of the severity of this type of assault. One in four women will experience intimate partner violence (IPV) in their lifetime, and of those, up to 68 percent will suffer near-fatal strangulation at the hands of their partner.

Why reported strangulation is a big warning sign for professionals

Not to be confused with “choking”, strangulation refers to when pressure is applied from the outside, cutting off airflow and/or blood vessels in the neck, preventing oxygen from reaching the brain. Choking, meanwhile, refers to a blockage inside the throat which makes it hard to breathe.

During an incidence of strangulation, closing off the airway makes breathing impossible, and a victim may lose consciousness due to the blocking of blood flow to and from the brain. Strangulation may obstruct the carotid arteries in the neck, depriving the brain of oxygen. Unconsciousness may also occur due to the blocking of the jugular veins which prevents deoxygenated blood from exiting the brain.

The perpetrator strangles as a form of power and control over their intimate partner by controlling their breathing. This pressure can lead to a loss of consciousness within five to ten seconds and cause death within a few minutes.

Because such a thin line exists between unconsciousness and death, strangulation sits just before homicide on the continuum of domestic violence risk assessment.

Over the past 20 years, prosecutors and physicians have paid closer attention to the serious danger caused by strangulation, and strangulation is now recognized as one of the most lethal forms of violence. Since 2010, criminal laws reflecting the severity of strangulation have passed in at least 45 states in the US.

Depending on state law, strangulation can be charged as a misdemeanor or felony, but can also be coupled with attempted homicide charges based on the severity.  Current laws focus on the cutting off of another person’s blood flow or breathing, making it easier to prosecute even without visible injury. Professionals should also consider other high-risk factors such as the patient and/or perpetrator’s access to firearms, if the patient is suicidal, sexual violence, and injury to animals.

How to identify signs and symptoms of strangulation

When someone is being strangled, they will often try to regain control of their airway, by trying to pry the hands of the perpetrator off of them which can leave injuries on their neck and also leave the assailant with scratch marks or injuries on their face and hands. Strangulation may also coincide with other forms of domestic violence that leave bruising due to kicking, hitting, or pushing down the stairs.

Physically, the victim may have difficulty breathing, speaking, and swallowing or experience nausea, vomiting, lightheadedness, headache, involuntary urination and/or defecation (common in pregnant victims). In these cases, conducting an immediate medical exam could prove necessary in saving the victim’s life.

Signs of strangulation are not always visible

Just because a victim lacks any external signs of strangulation does not mean that they are not injured. Penny Clute, former Clinton County District Attorney and Plattsburgh City Court judge, recalls, “Whether death resulted or not, only half of strangulation victims had marks on their necks, and only 15 percent of those marks were clear enough to photograph.”

A victim may suffer from internal injuries that do not appear on the outside. Immediately after the attack, the person may experience intense pain, vision changes, ringing in the ears, a swollen tongue, cuts in the mouth, swelling of the neck, difficulty swallowing, trouble breathing, or voice and throat changes.

The victim may also experience neurological damage due to a lack of oxygen flow to the brain. These symptoms can include memory loss, dizziness, headaches, vomiting, and extreme weakness.

Death can also occur days or weeks subsequent to the attack due to carotid artery dissection and respiratory complications such as pneumonia, acute respiratory distress syndrome (ARDS), and the risk of blood clots traveling to the brain (embolization).

According to forensic nursing expert, Diana Faugno MSN, RN, CPN, SANE-A, SANE-P, FAAFS, DF-IAFN, DF-AFN, Computed Tomography Angiography (CTA) to scan the soft tissues and vascular structures of the neck should be assessed as appropriate to prevent further injury and possible death to the strangulation victim.

“Carotid artery dissections are the number one cause of stroke in people under the age of 45. Medical literature reports that the time period between neck trauma with an arterial injury and the patient’s presentation with an acute stroke can be hours to years,” states Faugno.

Medical experts say that the lack of blood flow and oxygen to the brain during strangulation can cause memory loss, and the person may not remember what happened. In some cases, the victim may dismiss the incident as choking and seem fine after the attack, thinking the danger has passed. Nurses, therefore, must learn to recognize the signs and symptoms of strangulation to prevent any further damage or death.

What to do after identifying a victim of strangulation

Addressing strangulation effectively can prevent serious permanent side effects and death. Forensic nurses should know how to recognize and handle strangulation to help victims get appropriate medical care and emotional support, even after memory loss.

Sexual Assault Response Teams should ensure that professionals understand how to conduct a non-fatal strangulation exam including:

Documentation aids are critical in the effective criminal prosecution of strangulation cases. When able, professionals should document changes in the victim using photographs sequentially for a period of days following the assault to establish a journal of physical evidence. Forensic nurses should also take detailed accounts in their forensic exam notes with the exact date and time to monitor the progression of signs and symptoms.

When in doubt, medical professionals can consult with experts during a forensic exam for guidance on recognizing strangulation. EVA for sexual assault examinations can help track information collected and share patient records with physicians, law enforcement, and legal teams for expert advice. The EVA System’s filters can help to highlight any bruising that may be less visible to the naked eye.

Alliance for HOPE International, the leading domestic violence and sexual assault prevention organization in the United States, also provides information on strangulation, including training for police, prosecutors, medical clinicians, and domestic violence advocates to help recognize the signs and symptoms.

As a history of strangulation is a high-risk factor for intimate partner homicide, be sure to provide your patients with resources for safety planning if they are ready to leave their abusive partner. A safety plan essentially outlines the resources available to domestic violence victims and what to do in specific situations whether they decide to stay with or leave their abuser.