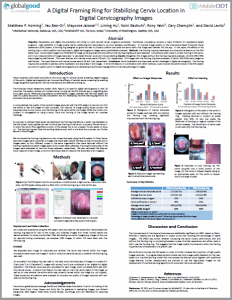 DOWNLOAD THE POSTER ON DIGITAL FRAMING RING FOR DIGITAL CERVICOGRAPHY >

Objective: Visualization and digital documentation are critical to many cervical cancer programs worldwide. Practitioner competency remains a major limitation of visualization-based programs. High variability in image quality (cervix positioning and sharpness) is common among practitioners. To improve image quality on the smartphone-based Enhanced Visual Assessment (EVA) System, a framing ring designed to guide the user to properly position and scale the cervix within the image was inserted into the app. In this paper, the effects of the framing ring on cervix position and sharpness in digital cervicography images were quantitatively analyzed.

Methods: The framing ring was developed as a smartphone feature on the EVA System app. Anonymized images from MobileODT’s image portal acquired with and without the framing ring feature were selected. Comparisons were made in proper framing of the cervix, and in two measurements of image sharpness – a calculated Brenner score and manual labeling.